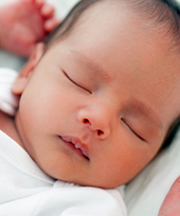 Prevention of infant deaths is a priority for Calhoun County. Reduction of infant mortality is generally focused on lowering risk factors for early childhood death. The leading causes of infant death are from problems beginning in the perinatal period (prematurity, low birthweight), birth defects, and SIDS/asphyxia/suffocation deaths. Sleep related deaths from SIDS/asphyxia/suffocation stand out as being the most preventable and have been a focus of coalition efforts in our community. Our goal is for every baby to sleep in a safe environment.

Research has shown that placing infants to sleep on their backs, in a crib, and with nothing in the sleep area decreases the likelihood of the baby’s dying during sleep. In our community, many infants who die at home are in an unsafe sleep environment.

We believe we can make a difference for babies’ survival by providing the community with knowledge, skills and resources to protect babies. We want to include parents, caregivers, health care providers, child care providers in teaching and modeling safe sleep practices and in providing other strategies to comfort infants and promote healthy growth and development.

(from the American Academy of Pediatrics)

Sudden Infant Death Syndrome (SIDS) is the sudden death of an infant under one year of age which remains unexplained after a thorough case investigation, including performance of a complete autopsy, examination and re-enactment of the death scene, and review of the infant’s clinical/medical history

Why should I place my baby on his or her back to sleep?

Research also shows that babies who sleep on their backs are less likely to get fevers, stuffy noses, and ear infections. The back sleep position makes it easier for babies to look around the room and to move their arms and legs.

Most sleep-related deaths in Calhoun County happen when babies sleep with an adult. It doesn’t take much for a baby to suffocate.

Remember: Babies sleep safest on their backs, and every sleep time counts!

Will My Baby Choke if placed on his or her back to sleep?

No. Healthy babies naturally swallow or cough up fluids—it's a reflex all people have to make sure their airway is kept clear.

Babies might actually clear such fluids better when on their backs because of the location of the windpipe (trachea) when in the back sleep position.

I saw a product that said it could prevent SIDS and keep my baby in the right position during sleep. Can I use it to prevent SIDS?

You should not use these products for your baby. There is no known way or product to prevent SIDS. The U.S. Food and Drug Administration, the Consumer Product Safety Commission, the American Academy of Pediatrics, and other organizations warn against using these products because of the dangers they pose to babies.

If my baby rolls onto his or her stomach during sleep, do I need to put my baby in the back sleep position again?

No. Rolling over is an important and natural part of your baby's growth. Most babies start rolling over on their own around 4 to 6 months of age. If your baby rolls over on his or her own during sleep, you do not need to turn the baby over onto his or her back. The important thing is that your baby starts every sleep time on his or her back to reduce the risk of SIDS, and that there is no soft, loose bedding in the baby's sleep area.

What if my baby's grandparents or another caregiver wants to place my baby to sleep on his or her stomach for naptime?

It is important for everyone who cares for your baby to use the back sleep position for all sleep times—for naps and at night.

Are there times when my baby should play on his or her stomach?

Yes, your baby should have plenty of “tummy time” when he or she is awake and when someone is watching. Supervised tummy time helps strengthen your baby's neck and shoulder muscles, build motor skills, and prevent flat spots on the back of the head.

Should I use a pacifier?

Research suggests that settling your baby to sleep with a pacifier – even for naps – can reduce the risk of SIDS. If breastfeeding, do not offer a pacifier until one month of age or until breastfeeding is well-established. Don’t worry if the pacifier falls out while your baby is asleep, there is no need to replace it. If your baby refuses a pacifier, don’t force it. Never coat the pacifier in anything sweet. If using a pacifier, be sure to offer it at every sleep.

Do immunizations decrease my baby’s risk of SIDS?

Yes. The American Academy of Pediatricians recommends that infants be immunized. Evidence suggests that immunization reduces the risk of SIDS by 50 percent.

All of my babies slept on their stomachs. Won’t babies sleep longer with that “full” feeling on their bellies?

Not necessarily. Babies who sleep on their backs from birth often find that to be the most comfortable position and learn to adjust to their environment.

Will my baby get a flat spot on his/her head from back sleeping?

Flat spots can occur if, during awake time, babies don’t get their “tummy time” or spend an extended amount of time in a swing or car seat. Tummy time is supervised playtime for babies. It gets them off their backs, allows for development of upper body muscles, and gives babies the opportunity to see the world from a different view.

I know a lot of people who sleep with their baby.

Babies are more likely to suffocate when they sleep with an adult. Put your baby's safety first.

We’re here for you BornToBe@gracehealthmi.org

The Period of PURPLE Crying

If your organization is interested in having a presentation or training on infant safe sleep, email Alyse Nichols or call her at 269-969-6482.